When You Wish For Your Own Christian Grey, What Are You Really Going To Get? 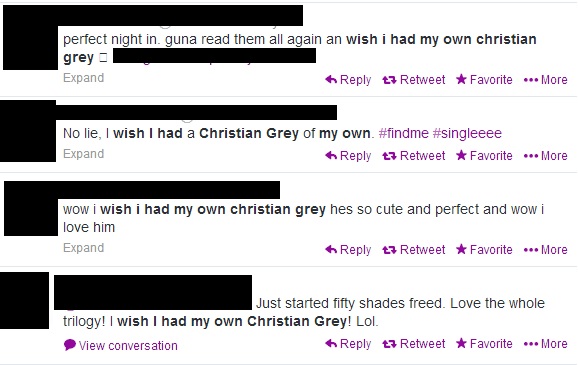 It's something we see on Twitter, Facebook and on blogs written by Fifty Shades fans, day in, day out.  "Oh how I wish I had my own Christian Grey."  But what are these people really wishing for?  A ridiculously handsome guy?  That's harmless enough.  A man so rich he could buy you absolutely anything you ever wanted?  Perhaps that's a little shallow, but ultimately, it's still harmless.  What's not harmless is qualifying that dream man by saying you actually want Christian Grey.  Sure, he's portrayed as having the looks and the money, but look beyond that to his actual behaviour.  Imagine what a relationship with him would really be like...

Imagine living with a partner who checks up on you at work to keep you "in your place."  Who tells you that he intends to buy any company you're employed by, in order to have constant control over you, whether you like it or not.  Your professional life would no longer be your own.  It would be entirely under his control.

Imagine your home life being equally restricted.  You are told what to eat, what to wear and how to behave, in spite of trying to argue against this level of excessive, unwanted control.  You aren't given your own free choices.  Imagine that when your life is put in danger, your partner's obsession for control means he refuses to involve the police, in spite of claiming that he wants to protect you.  You are now someone else's puppet, both at home and at work; everything in your life is dictated by someone else.

Imagine your social life taking a nose-dive, as well.  You're made to seek permission from your partner before you can agree to a night out with friends.  You feel fearful of his reaction if he finds out you've been on a night out after he has forbidden it.  You can't go away to visit family, without him turning up out of the blue to ensure you don't have any respite from him.  He becomes jealous and possessive every time you speak to a male friend and he slowly isolates you from your female ones, too. 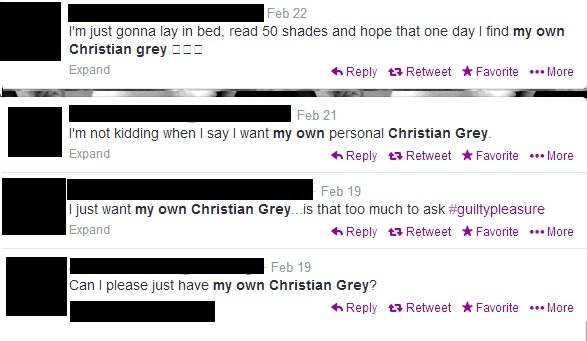 Imagine saying no to sex and trying to kick your partner away, then having him tell you that if you struggle, he'll tie your feet together and gag you so that you can't make a sound.  That's not "kinky fuckery."  It's rape.

Imagine telling your partner that you find aspects of your sex life less than enjoyable.  Imagine telling him that he's making you feel "abused" and "humiliated."  And then imagine him telling you to deal with it.

Imagine your partner using emotional manipulation to encourage you to think that he can't help the way he treats you.  Imagine believing that he doesn't know any better.  Imagine feeling responsible for "fixing" him.  Imagine wondering whether it's you who has the problem.

The fact is, the life described above is exactly what Ana has with Christian Grey.  And it's also what 1 in 4 women experience day in, day out.  Being controlled, threatened and manipulated.  It's not love.  It's not "kinky fuckery."  It's abuse.

And yes, I'm sure there are Fifty Shades fans who'll be oh so eager to tell me of Christian's good points.  The way he buys gifts for Ana, or the flowery words he gives her - his promises of love.  News flash:  Abusers do all of that, too.  It's how they get their partners to stay.  Those glimpses of the person they fell in love with are enough to keep them there.

The truth is simple.  Christian Grey is an abusive man, whose behaviour has been romanticised by an author lucky enough (presumably) never to have experienced abuse herself.  Next time you see someone pining for a Christian Grey of their own, send them this blog.  Ask them to consider what they're really wishing for.  And pray they never get it.