An Open Letter To Men Everywhere...

If there's one thing I'm tired of seeing, it's articles with headlines such as "How To Make Your Man More Like Christian Grey!"  If you've not seen one, count yourself lucky.  They're everywhere.  And now they're being aimed at men, too.  "The Top 5 Moves You Can Learn From Christian Grey" and so on and so forth.  Because apparently, Christian Grey is the man every woman wants and the man every guy wants to be. 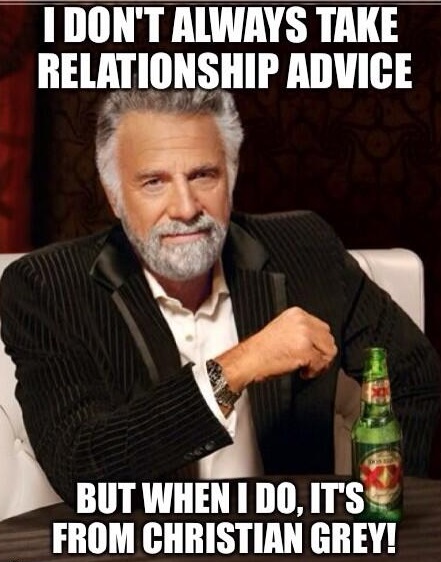 Well no.  Christian Grey is the man no woman in her right mind should be pursuing and the man no bloke worth his salt should ever seek to replicate.  The other day, I stumbled upon a letter on a Q&A page, written by a young man who was genuinely concerned that he wouldn't find a girlfriend unless he became more like Christian Grey.  That was when I decided enough was enough.  It's time to set the record straight.  This is my open letter to men everywhere.

It's time we talked about Fifty Shades of Grey.  And no, I don't mean that I'm about to refer to "down there."  Sorry.

A lot of you appear to be convinced that every woman on the planet wants a man like Christian Grey in her life.  And that's where you're wrong.  Because those who do will never find him - he's fictional (and thank goodness he is, because he's also an abusive arsehole).  And those of us who don't want a man to be anything like him are quite frankly sick and tired of being lumped in with everyone else.  Let's be honest - you're all different, right?  Well so are women.  We don't all like soppy movies and the colour pink.  And we don't - shock, horror - all fantasise about Christian Grey.  Give me Matt Smith over that idiot any day.

Here's the thing:  Women ARE all different.  We all want different things from a man.  But there are some things that are pretty much universal.  For example, no woman wants a man who secretly tortures small animals, makes jewellery out of his own teeth and urinates in the fridge.  And if there is a woman who wants that, then...  Well, I'd rather not think about it.  Another universal thing?  I'm fairly sure that no woman wants to be harrassed, stalked, manipulated and abused by someone who claims to love her.  And that's precisely what Christian Grey does.

I'm not here to tell any of you what all women Do want, because as I said, we're all different and we all want different things.  But, having read a few online "step-by-step guides," telling you all how you can be a little bit more like Christian Grey, I am going to take the top three suggestions from those guides and tell you why being more like Christian Grey is the absolute last thing you want to be doing, whether you're already in a relationship, or still on the lookout.

1. Be Knowledgeable About Sex: The online articles I've read will lead you to believe that Christian Grey is some sort of love God, whose sexual prowess is second to none.  The truth is that the sex scenes in Fifty Shades are incredibly repetitive and the words "down there" or "oh my!" are about as erotic as wallpaper paste.  Yes, it's a turn-on to some women if you're very clued up in the bedroom.  Foreplay is a good thing and asking your partner what she actually wants, sexually speaking, is a great way to ensure that the sex you have together is mutually beneficial.  However, Christian Grey is not an example of  a man who gets this stuff right.  He is far more interested in his own needs and desires than he is in Ana's.  When he goes to her apartment and sees that she's upset, he pesters her for sex.  She says no, but he decides not to stop attempting foreplay, until she eventually gives in.  That's not passionate; it's coercive consent at best, borderline rape at worst.  When he asks Ana what sort of things she's up for in the bedroom and she tells him what doesn't appeal, his response is "we'll try it anyway."  He''s not listening to her.  In an erotic novel, there might be a happy outcome.  But in reality, if you're overruling your partner's wants in the bedroom, or not taking "no" for an answer, then you're more likely to see her running for the door than breaking out the whips and handcuffs.  You're not going to be satisfying her if you're only bothered about yourself.  Christian Grey is not the sexual Adonis he's painted as.  He's a selfish lover who just happens to be fortunate that his partner has a magical "down there" that means she climaxes every time she sneezes.  So if you want sex advice, don't take it from Christian Grey.  Take it from your partner.  Because she's going to give you a much more useful response.

2. Make Her The Centre Of Your Universe: Aah.  We love that you love us, boys, we really do.  But there's a massive difference between letting us know that we mean something to you and the creepy, ultra-possessive manner in which Christian Grey behaves.  Yes, some women will really appreciate a cute text in her lunch break, to let her know you're thinking of her.  But as I said, we're all different.  Some women will find it claustrophobic if you're calling or texting her all the time.  Again, the best thing to do is actually talk to your partner; if you love her, tell her.  Ask how her day was.  Do things that make her see that you care.  As for what sort of things you should do?  Well, get to know her.  Once you know what she likes and dislikes, you'll know how to put a smile on her face, just by doing something simple to make her day easier, or more enjoyable.  As for what sort of things you shouldn't do?  Well, don't track her mobile phone and turn up out of the blue when she's on a night out with friends.  If she asks you for some space, don't stalk her thousands of miles and refuse to give her that space.  Don't buy the company she works for, just so that you can keep tabs on her when she's meant to be doing her job.  Don't control whether or not she's allowed to see her family or friends - they were in her life before you, after all.  Don't say creepy things like "YOU. ARE. MINE."  I mean yuck, what kind of guy would do those things?!  Christian Grey.  Still sure you want to be more like him?!

3. Learn To negotiate: This is genuinely important in relationships.  If you're in it for the long haul, there are going to be some big decisions to make along the way (and a whole heap of little ones as well), so you're going to need to be able to listen to what your partner wants and learn to find a happy medium between what she thinks is best and what you think is best.  But seriously, don't go to the Christian Grey School of Negotiation.  We've already mentioned that when Ana tells him there are certain things she doesn't fancy trying in the bedroom, Christian responds by telling her they'll be doing it anyway.  Um, waaay to negotiate, Grey.  Christian's idea of negotiating is to either listen to Ana's thoughts and then completely overrule them, or to hear what she has to say and then emotionally manipulate her into agreeing with him instead.  Don't believe me?  Ana wants to keep her maiden name at work, so that her colleages don't just think that she got her promotion purely because the company is now owned by her husband.  Christian is pissed off about this, because he thinks it's 1935 and his marriage certificate is also a contract of ownership and the world needs to know that Ana is his property.  He turns up at her workplace and first intimidates her by causing a scene and shouting at her.  Then he turns on the "oh but I love you so much..." manipulative drivel and guess what?  Ana agrees to change her name.  That's not negotiation.  It's persuasion.  And it's really not sexy.  Again, in a novel, this might all magically end well, but in reality, if you're constantly "negotiating" by playing on your partner's emotions to ensure they feel pressured into agreeing with you, she's eventually going to wise up to it and kick you to the curb.

Look guys, what I'm saying here is that yes, there are women out there who want you to dominate them in (and sometimes out of) the bedroom.  But newsflash:  Doing that means it's even more important to listen to what your partner wants and what she does/doesn't enjoy than it is in a non-BDSM relationship.  Christian Grey gets that wrong.  Every time.  He's not a good Dom.  He's not a great lover.  Ana might think he is, but that's because she was a virgin when they met - she knows no better, poor girl.  In reality, Christian puts his desires ahead of hers time and time again and believe me; do that in a real sexual relationship and you're going to end up with a dissatisfied partner and, eventually, an empty bed.

And sure, some women like to be treated like princesses and given gifts and endless affection.  Others are more independent.  Christian is just a possessive stalker with literally no boundaries.  Follow a girl around in real life to the degree that he follows Ana in the book and you're not going to end up with a girlfriend.  You're going to end up with an injunction.

There's the fact that he uses emotional abuse against her constantly, taking no blame for his own behaviour and insisting that he can't help the way he is and that she needs to be the one who helps him to change.  The reality is that if you're not prepared to step up and say "I shouldn't have behaved like that, sorry," once in a while, no woman worth her salt is going to stick around.  The "poor me" schtick gets really boring if you use it endlessly.  Christian is essentially a petulant two year old, sticking his lower lip out and relying on his sad eyes to work their magic on Ana, so she'll just accept his lousy behaviour.

Women may say they want a man like Christian Grey.  I suspect it's because for a lot of women, Fifty Shades was one of the first pieces of erotica they'd read and they became blinded to the fact that the main male character in the story is an abusive dickhead, because they were too busy wondering whether they'd be up for a bit of spanking.  The truth of the matter is very simple:  Behave like Christian Grey in real life and you'll end up alone.  Some women may think the fiction is sexy, but stalking, controlling and manipulating have no place in a couple's healthy reality.  Want to be your partner's perfect man?  Simple.  Take a long look at Christian Grey.  And then be nothing like him.